Smoky ham, melted Swiss cheese and spicy mustard on a soft, toasted bun. Serve up a platter of these Mini Cordon Bleu Turkey Sliders at your next football party and watch them disappear! We eat sandwiches almost daily around here, and my Cordon Bleu turkey sliders are a family favorite! They’re incredibly easy to assemble. You can have a whole platter ready in no time!

Feeding my family nutritious, healthy meals is very important to me, and I try not to buy lunchmeat with artificial ingredients or nitrates. The problem with that was there weren’t many choices available – until now.

Hillshire Farm Naturals™ comes in four flavors: Slow Roasted Turkey Breast, Hardwood Smoked Turkey Breast, Honey Roasted Ham, and Black Forest Ham. It’s free of artificial ingredients, preservatives, colors and is incredibly low in fat and calories. But none of that matters if it doesn’t taste good, right? Well, not only is 100% good for you, but it’s 100% delicious!

Next, I noticed that it wasn’t slimy at all, which is a huge deal in my house. When my kids were growing up, they actually refused to eat lunchmeat that was slimy, so I usually made my own sandwich spreads or sliced meat myself. This is real meat ya’ll, and it holds up to just about any kind of preparation – not just sandwiches. I’ve used it for breakfast burritos, appetizers, and all kind of sandwiches both hot and cold. For this recipe, I decided to go with sliders because they’re easy to eat and perfect for any kind of party or event. Since my everyone in my family loves Cordon Bleu, I decided to make my own version – slider style! The traditional recipe uses chicken, but I went with the Hillshire Farm Naturals™ Hardwood Smoked Turkey Breast and Black Forest Ham. Ham is a must in any Cordon Bleu and the smoky flavor of the turkey was a delicious twist on a classic recipe!

I like to set up an assembly line when I make sliders, and I do everything right on the pan I’m going to bake them on! Preheat your oven to broil. Split six slider buns in half and place them open-faced on a baking sheet lined with parchment paper or non-stick foil. Broil until they are lightly brown, which happens very fast, so watch them close!

After toasting your buns, they’ll need a good slathering of my spicy mustard sauce on each piece (recipe below). Next, add a half of a slice of Swiss cheese to each bottom piece (I break each slice into fourths). Then some onions (if ya’ want to) – and then two more squares of cheese. Remove the top piece of the bun from the pan and broil the sliders until the cheese is melted, which was about 40 seconds in my oven. Add the top of the buns and serve immediately!

Did you try this recipe? 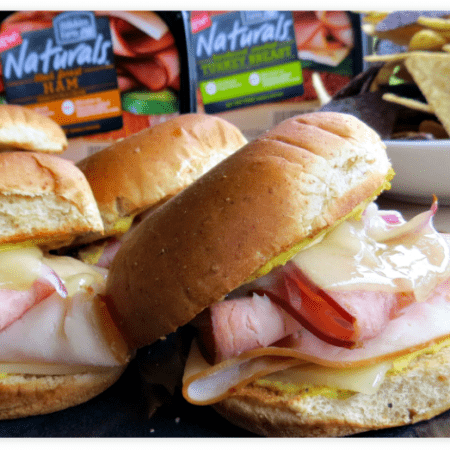 Tried this recipe?Let us know how it was!

I’m required to disclose a relationship between our site and Hillshire. This could include Hillshire providing us w/content, product, access or other forms of payment.